A new look at a common parasite

(The story behind Demodex, Acne, Cysts, Bumps, Dots and Other Skin Abnormalities)

So you need to know that there is a small bug on your face right now. The bug is called:

Demodex is considered a “normal and harmless” ectoparasite and according to most medical journals. This “harmless” parasite is considered a normal part of human skin flora and it can NOT be seen with the human eye, however, manifestations of it can. Recent data has begun to challenge this old notion.

A MASSIVE study of over 12,000 people across 4 countries and 3 continents shows that Demodex actually is the root cause of several dermatological conditions. This includes acne and cysts.

The study shows that individuals who have any form of acne (especially cystic) are 2.8-2.9 times MORE likely to have a severe Demodex infestation.

Recent evidence has been showing more and more that this nasty guy is most likely responsibile for:

The Dirty Details on Demodex

My Experience with Demodex

After years of trying to figure out why I had a sudden onset of acne later in life, I began to do a great deal of research. One day I realized that I (like more people, most doctors, and most nurses) had just looked at how to treat it. I had not looked at my acne from a root-cause perspective.

I began to do research on bacterial, viruses, and fungus, then one day after hearing a podcast on health they mentioned how parasites affect your stomach and are common. At that moment I realized I had not looked into parasites and acne. So I began my research and discovered things such as the 13,000 person study from a diverse and global sample size.

For 1-2 years I allowed doctors to simply prescribed me antibiotics and cream all of which made some minor improvement. Occasionally I even had clear skin and I had a normal-looking face. But it would never last.

Then I asked and begged to try being treated for Demodex. 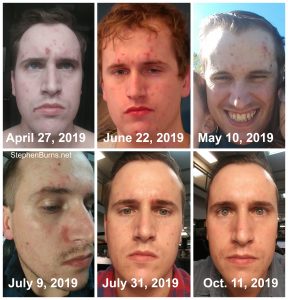 The first 5 photos in the picture below show the times I tried primarily creams and some antibiotics.

The first photo on the bottom row shows a clear indication of the severity of the infection I had.

The last 2 photos that show clear skin were taken after treatment with Ivermectin tablets.

Ivermectin is an antiparasitic that is practically considered a wonder drug b/c of how safe it is and how effective it is at killing both internal and external parasites.

Oddly enough Soolantra (an ivermectrin cream – which cost over $360 w/o insurance and between $30-60) was recommended to me because it had been FDA approved to help with Acne and Rosecea. This was told to me without any consideration for why it was effective against those things. That is what let me to look into Ivermectin as cure for this disease.