– is the use of one or more large LCD / LED displays that display information in public spaces.

While at the Penn-Harris-Madison School Corporation I was charged with managing the newly installed digital signage system. Scroll down for more before and after photos, or continue reading for more information and details of my work with digital signage. 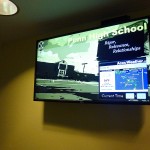 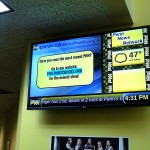 The school district had just purchased LG SuperSign, the digital signage software solution from LG.  The LG SuperSign system was supposed to be a nearly turn-key solution, however there were several problems.  Some of the problems included:

A few months later and after a handful of headaches problems with the LG SuperSign software I decided to look into other solutions. I soon thereafter discovered several free or cost effective alternatives such as Xibo, Rise Vision, and DigitalSignage.com.  After doing some more research I chose to go with Xibo a free and open source digital signage software solution that would run on virtually any hardware.

I choose Xibo because of the following features:

While it took a few weeks to fine tune and implement the new solution, the final product was more stable, easier to manage, easy to update, and more more visually appealing.

The final template that I designed featured:

All of the above features automatically updates and get the latest data every 5-10 minutes. 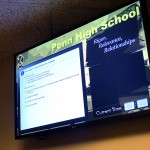 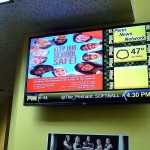 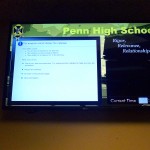 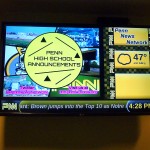 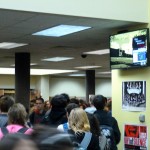 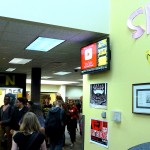